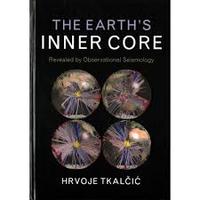 Naslov: The Earth's Inner Core: Revealed by Observational Seismology
Autor(i): Hrvoje Tkalčić
Izdavač: Cambridge University Press
Godina izdanja: 2017
ISBN: 9781139583954
O knjizi:
The inner core is a planet within a planet: a hot sphere with a mass of one hundred quintillion tons of iron and nickel that lies more than 5000 kilometres beneath our feet. It plays a crucial role in driving outer core fluid motion and the geodynamo, which generates the Earth's magnetic field. This book is the first to provide a comprehensive review of past and contemporary research on the Earth's inner core from a seismological perspective. Chapters cover the collection, processing and interpretation of seismological data, as well as our current knowledge of the structure, anisotropy, attenuation, rotational dynamics, and boundary of the inner core. Reviewing the latest research and suggesting new seismological techniques and future avenues, it is an essential resource for both seismologists and non-seismologists interested in this fascinating field of research. It will also form a useful resource for courses in seismology and deep Earth processes.

Naslov: The Ascent of John Tyndall
Autor(i): Roland Jackson
Izdavač: Oxford University Press
Godina izdanja: 2018
ISBN: 9780198788959
O knjizi:
Rising from a humble background in rural southern Ireland, John Tyndall became one of the foremost physicists, communicators of science, and polemicists in mid-Victorian Britain. In science, he is known for his important work in meteorology, climate science, magnetism, acoustics, and bacteriology. His discoveries include the physical basis of the warming of the Earth's atmosphere (the basis of the greenhouse effect), and establishing why the sky is blue. But he was also a leading communicator of science, drawing great crowds to his lectures at the Royal Institution, while also playing an active role in the Royal Society. Tyndall moved in the highest social and intellectual circles. A friend of Tennyson and Carlyle, as well as Michael Faraday and Thomas Huxley, Tyndall was one of the most visible advocates of a scientific world view as tensions grew between developing scientific knowledge and theology. He was an active and often controversial commentator, through letters, essays, speeches, and debates, on the scientific, political, and social issues of the day. Widely read in America, his lecture tour there in 1872-73 was a great success. Roland Jackson paints a picture of an individual at the heart of Victorian science and society. He also describes Tyndall's importance as a pioneering mountaineer in what has become known as the Golden Age of Alpinism. Among other feats, Tyndall was the first to traverse the Matterhorn and the first to ascend the Weisshorn. He presents Tyndall as a complex personality, full of contrasts, with his intense sense of duty, his deep love of poetry, his generosity to friends and his combativeness, his persistent ill-health alongside great physical stamina driving him to his mountaineering feats. Drawing on Tyndall's letters and journals for this first major biography of Tyndall since 1945, Jackson explores the legacy of a man who aroused strong opinions, strong loyalties, and strong enmities throughout his life.

Naslov: The Tectonic Plates are Moving!
Autor(i): Roy Livermore
Izdavač: Oxford University Press
Godina izdanja: 2018
ISBN: 9780198717867
O knjizi:
This book explains modern plate tectonics in a non-technical manner, showing not only how it accounts for phenomena such as great earthquakes, tsunamis, and volcanic eruptions, but also how it controls conditions at the Earth's surface, including global geography and climate. The book presents the advances that have been made since the establishment of plate tectonics in the 1960s, highlighting, on the 50th anniversary of the theory, the contributions of a small number of scientists who have never been widely recognized for their discoveries. Beginning with the publication of a short article in Nature by Vine and Matthews, the book traces the development of plate tectonics through two generations of the theory. First generation plate tectonics covers the exciting scientific revolution of the 1960s and 1970s, its heroes and its villains. The second generation includes the rapid expansions in sonar, satellite, and seismic technologies during the 1980s and 1990s that provided a truly global view of the plates and their motions, and an appreciation of the role of the plates within the Earth 'system'. The final chapter bring us to the cutting edge of the science, and the latest results from studies using technologies such as seismic tomography and high-pressure mineral physics to probe the deep interior. Ultimately, the book leads to the startling conclusion that, without plate tectonics, the Earth would be as lifeless as Venus.

After reading and using this book, you'll get some takeaway case study examples of applications that can be found in areas like business management, big data/cloud computing, financial engineering (i.e., options trading investment alternatives), and even games.

Up until very recently, Python was mostly regarded as just a web scripting language. Well, computational scientists and engineers have recently discovered the flexibility and power of Python to do more. Big data analytics and cloud computing programmers are seeing Python's immense use. Financial engineers are also now employing Python in their work. Python seems to be evolving as a language that can even rival C++, Fortran, and Pascal/Delphi for numerical and mathematical computations.

Naslov: Climate in motion: science, empire, and the problem of scale
Autor(i): Deborah R. Coen
Izdavač: The University of Chicago Press
Godina izdanja: 2018
ISBN: 9780226398822
O knjizi: Climate in Motion shows that this multiscalar, multicausal framework emerged well before computers and satellites. Extending the history of modern climate science back into the nineteenth century, Deborah R. Coen uncovers its roots in the politics of empire-building in central and eastern Europe. She argues that essential elements of the modern understanding of climate arose as a means of thinking across scales in a state—the multinational Habsburg Monarchy, a patchwork of medieval kingdoms and modern laws—where such thinking was a political imperative. Led by Julius Hann in Vienna, Habsburg scientists were the first to investigate precisely how local winds and storms might be related to the general circulation of the earth’s atmosphere as a whole. Linking Habsburg climatology to the political and artistic experiments of late imperial Austria, Coen grounds the seemingly esoteric science of the atmosphere in the everyday experiences of an earlier era of globalization. Climate in Motion presents the history of modern climate science as a history of “scaling”—that is, the embodied work of moving between different frameworks for measuring the world. In this way, it offers a critical historical perspective on the concepts of scale that structure thinking about the climate crisis today and the range of possibilities for responding to it.

Naslov: On twenty-first century climate classification: European multiregional analysis
Autor(i): Ferenc Acs
Izdavač: LAP Lambert Academic Publishing
Godina izdanja: 2017
ISBN: 9786202003025
O knjizi: Climate classification is an everlasting subject. It is not only of interest nowadays, but was even a subject in the times of the Ancient Greeks. The spectrum of methods used is broad, but the most popular methods are the generic methods established by Köppen and Thornthwaite in the first part of the twentieth century. In this book, the focus is on Feddema’s revised Thornthwaite-type method. This method is extensively tested through an investigation of the European region’s climate during the course of the twentieth and twenty-first centuries using observed and projected data. The study contains a brief description of the evolution of the generic methods and the possible investigations related to them, a description of Feddema’s method and the latest results from research into climate and climate change in the European region and its various sub-regions. The subject can be of interest for both students and professionals studying or working in fields related to climate and climate change – meteorology, climatology, geography, geology, biogeography, ecology, and environmental sciences. The book may also be used as a textbook. 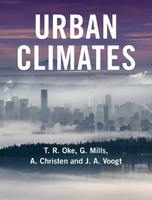 Naslov: Urban climates
Autor(i): T.R. Oke, G. Mills, A. Christen, J.A. Voogt
Izdavač: Cambridge University Press
Godina izdanja: 2017
ISBN: 9781107429536
O knjizi:
Urban Climates is the first full synthesis of modern scientific and applied research on urban climates. The book begins with an outline of what constitutes an urban ecosystem. It develops a comprehensive terminology for the subject using scale and surface classification as key constructs. It explains the physical principles governing the creation of distinct urban climates, such as airflow around buildings, the heat island, precipitation modification and air pollution, and it then illustrates how this knowledge can be applied to moderate the undesirable consequences of urban development and help create more sustainable and resilient cities. With urban climate science now a fully-fledged field, this timely book fulfills the need to bring together the disparate parts of climate research on cities into a coherent framework. It is an ideal resource for students and researchers in fields such as climatology, urban hydrology, air quality, environmental engineering and urban design.

Naslov: Fundamentals of seismic wave propagation
Autor(i): Chris Chapman
Izdavač: Cambridge University Press
Godina izdanja: 2004
ISBN: 052181538X
O knjizi:
Fundamentals of Seismic Wave Propagation presents a comprehensive introduction to the propagation of high-frequency body-waves in elastodynamics. The theory of seismic wave propagation in acoustic, elastic and anisotropic media is developed to allow seismic waves to be modelled in complex, realistic three-dimensional Earth models. This book provides a consistent and thorough development of modelling methods widely used in elastic wave propagation ranging from the whole Earth, through regional and crustal seismology, exploration seismics to borehole seismics, sonics and ultrasonics. Particular emphasis is placed on developing a consistent notation and approach throughout, which highlights similarities and allows more complicated methods and extensions to be developed without difficulty. This book is intended as a text for graduate courses in theoretical seismology, and as a reference for all academic and industrial seismologists using numerical modelling methods. Exercises and suggestions for further reading are included in each chapter. 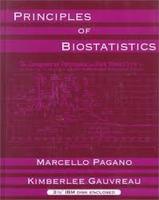 Naslov: Principles of biostatistics
Autor(i): Marcello Pagano, Kimberlee Gauvreau
Izdavač: Duxbury Press
Godina izdanja: 1993
ISBN: 0534140696
O knjizi:
This introduction to biostatistics offers health science students with limited math and statistics backgrounds a conceptually-based introduction to statistical procedures that will prepare them to conduct or evaluate research in biological and health sciences. Enthusiasm for the material will quickly spread to the reader from the author. The author's appealing writing style makes users of the text forget it is math. Students are encouraged to use common sense rather than rigorous theory to gain an understanding of statistics..The authors rely heavily on graphics to illustrate material and incorporate the use of computers to facilitate doing computations so students can concentrate on concepts. Quantitative principles discussed include descriptive statistics, life tables, probability, hypothesis testing, parameter estimation, regression (linear and logistic) correlation, survival analysis, analysis of variance, and more.